Above:  Photo of myself standing in front of 30th Street Station.

Below: While outside on a sunny day, I went to the Philadelphia Art Museum.  As an Art teacher in Philadelphia, I often go there free of charge.  As I was there, one of my spiritual guides showed up on top of a Griffin to assist me for a few photos. 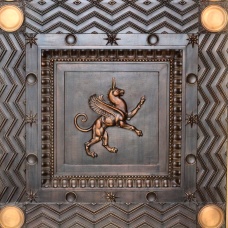 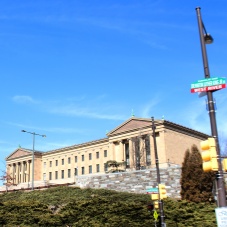 The griffin, griffon, or gryphon (Greek: γρύφων, grýphōn, or γρύπων, grýpōn, early form γρύψ, grýps; Latin: gryphus) is a legendary creature with the body, tail, and back legs of a lion; the head and wings of an eagle; and an eagle’s talons as its front feet. Because the lion was traditionally considered the king of the beasts and the eagle the king of birds, the griffin was thought to be an especially powerful and majestic creature. The griffin was also thought of as king of all creatures. The eagle, which is lord of the sky, reminds us of the divine nature, while the lion, which is lord of the earth (the “king of beasts”), reminds us of the human nature. In antiquity, it was a symbol of divine power and a guardian of the divine.  Some have suggested that the word griffin is cognate with Cherub/Cherubim.  The griffin has served many purposes, including but not limited to “the vigilant guardian of treasure, priceless possessions and of kings.  As a major heraldic animal, it has been emblazoned on the shields of knights and on the coats of arms and royalty. It has been watchful and loyal, graceful and swift, rapacious and vengeful, monstrous and divine.

Click to view a PDF about me: He Ron
HeRon

What is Black History?